Made-in-the-USA Apparel Manufacturing: The Journey, the Resurgence and Solutions to Meet a Growing Demand 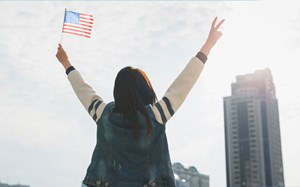 US manufacturing is rapidly changing, and the apparel industry is no exception. Technological innovations and an evolving marketplace are key factors that contribute to the industries largest shifts. However, the most significant factor that changed the face of manufacturing is foreign outsourcing. This change drastically reduced the number of goods bearing the “Made-in-the-USA” label.

In this article, we examine the current state of the American apparel industry, as well as its roots and predictions for the future of manufacturing.

For decades, business was booming in the US textile and apparel industries. In 1950, an estimated 2.5 million people were employed in these industries. However, by the early 2000s the industry saw rapid declines. By 2005, only 1.3 million individuals were employed in the textile and apparel industry, and by 2017, a mere 341,000.  According to the Bureau of Labor Statistics, over the last 25 years apparel had the largest labor decrease among all manufacturing industries at 85%, while textile mills decreased by 76%.

These statistics paint a troubling picture for apparel manufacturers. While examining this alarming trend, the obvious question remains: why? While a number of developments have occurred within the apparel manufacturing space over the last 25 years, the two most significant contributors to the drastic decline in employment are automation and foreign outsourcing.

As technological advances allowed for production processes to become more automated, jobs were eliminated. Tasks traditionally performed by people – knitting, weaving, and cutting – now were able to be executed by machinery and systems, replacing skilled workers while reducing costs and eliminating overhead.

But while automation impacted the apparel industry’s workforce, the words “made-in-the-USA” virtually disappeared from clothing when a significant shift toward outsourcing manufacturing to foreign factories occurred. Low production and labor costs combined with free trade agreements made the prospect of manufacturing overseas too attractive to pass up for many US companies.

The initial offshore outsourcing in apparel and textiles saw manufacturing go to Asian countries, such as China, Korea and Taiwan. In the 90s, US business shifted to Central America, but ultimately Asia came back on top as the number one outsourcing area. Today, China holds the majority of outsourced apparel and textile manufacturing from US companies, due in large part to its inexpensive and abundant labor.

The Return of Made-in-the-USA Apparel?

In the age of e-commerce, on-demand shopping, subscription services, and bespoke goods, the popularity of apparel manufactured in America strangely appears to be on the rise. The modern shopper is unconventional and does not frequent brick and mortar stores. Rather, they shop online, expect limitless options, appreciate start-ups that share their values.

These values often cause millennials to gravitate toward American-made products, causing some to dub them the “Made-in-the-USA” generation. A poll by the Ford Motor Company found that 91 percent of millennials believe American manufacturers make products of “equal or better quality as foreign competitors” and 74 percent believe purchasing products made in the USA is important.

With a growing demand for American-made products, many apparel companies are asking how to meet this new demand and how to capitalize on this homegrown momentum.

A range of possible solutions and actions are being discussed around this topic, including automation and AI, workforce training, micro-factories, and addressing the perceptions currently associated with a career in textile and apparel manufacturing. We’ll explore these areas in more detail below.

Micro factories are aptly named because they are essentially very small factories, which require a fraction of the square footage of traditional factories. They often utilize a significant amount of automation in their processes. They are also generally energy efficient and capable of quickly producing a product from start to finish.

In the apparel industry, micro-factories represent an ideal solution for the on-demand marketplace as they are nimble and capable of filling small, customized orders. Due to their small size, they are also far less expensive and easier to establish than their conventional factory counterparts.

But most importantly, micro-factories can tackle the apparel industry’s most significant challenge – inventory management. This is achieved by a process that is, as previously outlined, more on-demand and no longer bound by a traditional structure. Gone are the days which apparel is manufactured far in advance of a sale, ultimately resulting in overstock or situations in which a product is no longer in stock.

As previously mentioned, micro-factories are highly automated. By fully automating the manufacturing process, companies are able to avoid the labor cost concerns that often drive them to outsource production of their apparel. Automation also addresses the reality that labor is also in short supply in the U.S. apparel and textile industry.

While apparel and textile manufacturing is becoming increasingly automated and benefiting from streamlined processes, humans are still needed to perform the all-important task of sewing clothing.

Perhaps automation in the apparel industry can be more accurately characterized as a complement to manual, human-performed processes and tasks. The infrastructure and technology exists to get seamlessly through the cut room, but the question remains if automation is the right answer for the next processes. Some companies are employing an incremental approach to addressing this question – incorporating collaborative robots that work together with humans, or cameras that allow the operator to determine placement and other critical components of the process.

Skilled people are not only still needed; they are becoming increasingly rare. As experienced workers retire from the apparel and textile manufacturing industry, fewer and fewer replacements exist. Younger workers are seeking employment in other fields, often in higher-tech less manual fields.

But as outlined above, the apparel manufacturing industry is becoming increasingly high-tech. The problem lies largely in the perception of the industry. Investment and education will be required to re-frame the industry and help generate interest and excitement around the field. The charge must be led not only by the apparel industry, but also within the realm of education – in textile and apparel design courses and other relevant programs.

The Tools and Experience for an Evolving Industry

At Gerber Technology, we provide solutions for fast, U.S.-based manufacturing because that is what today’s consumer demands. We help our customers reduce time to market in order to satisfy today’s on-demand consumer, all while minimizing their inventories.

Contact us today to learn more and explore our solutions for forward-thinking apparel manufacturers.