The Signage Market is Changing

Soft signage is taking over the industry.

The signage market has seen dramatic shifts over the last decade, from font diversity to color usage and, significantly, in material preference. Demand for fabric-based signage, known in the industry as “soft signage,” represents the most substantial change for sign makers in recent history, and the increasing demand represents perhaps the greatest threat to signage printers who have yet to expand into this market.

Soft signage is taking over the industry in obvious fashion, apparent even to the average consumer walking through the mall or driving down the street or wandering about a trade show floor. For example, busy business complexes, such as shopping malls and airports, can display pop-up or rotating fabric signs to lend contemporaneous advertising slots to any number of shops or restaurants. The complex can generate more income by charging, say, five advertisers for the same space while saving on maintenance time and cost by only having to perform sign installation once instead of five separate times. For the advertisers, they are able to afford more complex ‘billboard’ time in terms of longevity by sharing the space with other advertisers, even while the ad host is able to ramp up revenue overall. 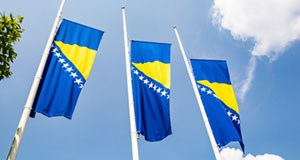 Professional signage options are now widely available to small, low-budget groups and organizations like nonprofits and school programs and projects thanks to advances in soft signage production. Instead of having to mount heavy and awkward rigid signs to vehicles or other large moving objects for display during demonstrations or parades, for example, soft signage enables easy, prop-less carrying of signage in the form of flags or banners by individuals, even by children.

Replacement of demand in the hard signage market has occurred at an exponential pace as advancements in technology have enabled less expensive soft material printing, and advancements in soft signage technology has also had the effect of creating a new market by making signage available to those would-be consumers who otherwise would not purchase hard signage due to the cost or because their needs simply cannot be met by traditional turnaround time frames. Signage consumers who previously couldn’t make their own signs due to inability to manage a large, rigid fixture or because the cost was simply prohibitive are now able to enter the signage consumer market thanks to the versatility of material and display options and the dramatic reduction in price for custom displays.

The advantages of soft signage are as numerous as its uses, and the market is realizing even more value as consumers exercise their creativity and as the industry continues to innovate its printing and finishing technologies. For consumers, the advent of soft signage opens a whole new world of advertising opportunity. With near-on demand production ability, cheaper and faster professional sign production allows for late hour planning and unexpected changes. No longer are businesses limited to investing heavily in hard, fixed product or service signs, which is a benefit from the showroom to the trade show floor where signage becomes outdated as soon as a price is dropped or a product is updated.

It is not only business offerings that change rapidly these days but also the business itself. Popup restaurants and activity spots are increasingly popular in large and mid-size cities, and soft signage provides a lightweight, highly versatile branding option that is well-suited for locations with high occupancy turnover or for businesses that need to be more mobile.

For printers, the primary advantages lie substantially in the ways the soft signage-enabling technology has allowed and, in some cases, forced shops to expand their offerings, increase output, and bring more production in house. By replacing or upgrading hard signage equipment with multipurpose, multi-material tools, shops not only expand their ability to serve both signage market demands without losing shop production space. The same multipurpose equipment such as the MCT cutter also enables shops to, when ready and willing, expand their offerings to apparel, packaging, and home furnishings.

Production time for soft versus hard signage is dramatically reduced due largely to automation teachers in soft signage tools, including the Gerber MCT cutter. Both input and turn around speed are facilitated by the ability to bring more production steps in house or cut them out all together. For example, a sign shop might previously have had to outsource hardware fitting for hard signs, whereas the equivalent functions and features for soft signage can easily be handled in house, possibly even on a single machine. Likewise, tools like the Gerber MCT cutter enable soft signage shops to cut out the common sewing step, which is often outsourced for finishing, by instead using the MCT laser finishing tool with materials that can eliminate sewing all together.