In every aspect of the fashion world, digitalization is driving the demand to bring new styles to market faster. Costume replicas are costly and, in the past, they were all done by hand. But recently Gerber Technology combined forces with Global Garment Engineering and 20th Century Fox to replicate costumes worn by Hugh Jackman, Zac Efron, Michelle Williams, Rebecca Ferguson and Zendaya in the upcoming film The Greatest Showman. By leveraging Gerber’s integrated digital solutions, they can now be done in a fraction of the time and at a much lower cost.

DIGITALLY DECONSTRUCT EACH COSTUME WITHOUT TAKING THEM APART.
The challenge 20th Century Fox presented was to produce 50 sets 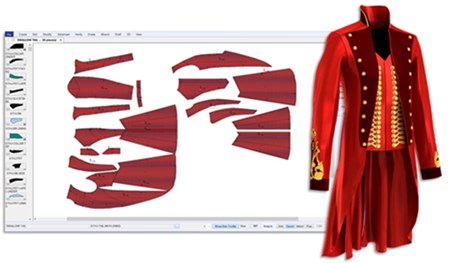 of replicas of beautiful and complicated costumes in a very short time frame (without taking them apart) to support the film’s release. Prior to project kickoff, photographs, technical sketches, measurements, component details and assembly instructions were compiled within YuniquePLM® to ensure planning, management and tracking of each essential step was executed properly and timelines were met. The job started by digitizing each garment on the Silhouette™ table, where pattern files were instantaneously created in AccuMark®. The patterns were simultaneously passed into AccuMark 3D, where they were draped on avatars to validate pattern pieces and review virtual samples ensuring the patterns would accurately and precisely be sewn together to create perfect replicas.

After the patterns were validated in AccuMark 3D, data was passed to AccuNest™ to create markers ensuring the optimum yield was achieved from the beautiful and expensive fabrics needed to produce the costumes. Over 22 diverse fabrics were spread and cut. A cut ticket was then generated for each of the garments to pass data from technical design through to production. The barcode on the cut ticket transfers all the fabric and marker data essential to efficiently spread and cut each costume.

GERBER'S INTEGRATED DIGITAL SOLUTIONS PLAYED A KEY ROLE.
In the cut room at Gerber’s headquarters in Tolland, Connecticut,
product experts loaded the fabric, scanned the cut ticket on the GERBERspreader™ XLs125 where the spread details were automatically transferred without manual re-entry of any of the information. After monitoring the spread, the material was passed on to be cut using the Gerber Paragon®. At the Gerber Paragon, the cut ticket was scanned again to pull up the marker for each garment. After carefully managing the process and labeling the bundles of cut parts, they were packed and shipped to New York for assembly.

BE PART OF IT ALL AS THE COSTUMES ARE UNVEILED NEAR YOU!
These exact replicas of the costumes worn by Hugh Jackman, Zac Efron, Michelle Williams, Rebecca Ferguson and Zendaya will be revealed at various locations around the globe to celebrate the magic of the film.